This is a bit personal, so if you don't want to read, feel free to ignore my comment. But for me, he is more than just a creation I've done to purge out sorrow, as the Fairies of Glendalough were, or to test my skills as The female Sidhe were back in 2014. Keira and Cluny, I wanted to experiment and add different styles to my work (and I've payed a high price for the ''felony'', but I regret nothing :_P). And my SD heads I cooperated with, one were the variations on Twigling's Ingenue, and the other my first attempt, ''Faun''.

With Levon is different, tho. Anyone who knows me a bit is aware of my rampant, chronic Elf-Obsession. Since I can remember, I've been bewitched and fascinated with the figure of elves, either Mythological ones ala Tuatha de Danaan, fictional, literarian or made of resin. 25 years ago, I was a teenager making my first elf character sheet to roleplay Middle Earth at a friend's house. And the passion has been burning -burning me alive, I'd say- since then. Not a surprise, most dolls in my collection, plus my own creations, are elves. Even I would love to look as an elf! It is within me. Part of me.
Levon represents to me not only my aesthetic ideals of male ''elven beauty'', but gets the name of one of my characters, alter-egos that have helped me to conciliate with my poignant masculine part giving me a way to express and know myself a bit more. Hence, exposing him to public is like exposing a very intimate, deep part of myself, and I'm not sure if I'm totally ready to bear him being a botch, or just some another dim of a dozen bjd in the immense sea of talent out there. I know it is just artist vanity, and we have to be put in our places and be reminded of how lame we are indeed, and how much to learn there is always ahead. But there is always this small parcel of insecurity and fear, and in this case, reaches deep into my soul. Then again, I repeat myself that I've made him for me, and it is me who has to like him. I never expected him to be anything close to ''a succesful work'', because i know well that the collectors of artist BJD's are by far much more interested in girls than in male dolls. So I remind to myself, that he speaks to me, and perhaps, will speak to someone else.
AS it has to be.


I've poured all my skill and soul into him, and can't believe I'm so, so close to completion. I do not know if I'll love or hate him when the prototypes come back to me and I've had some cooldown time without looking at him to spot all the flaws. But that does not matter, since all I know is I had to do it, and he is done. 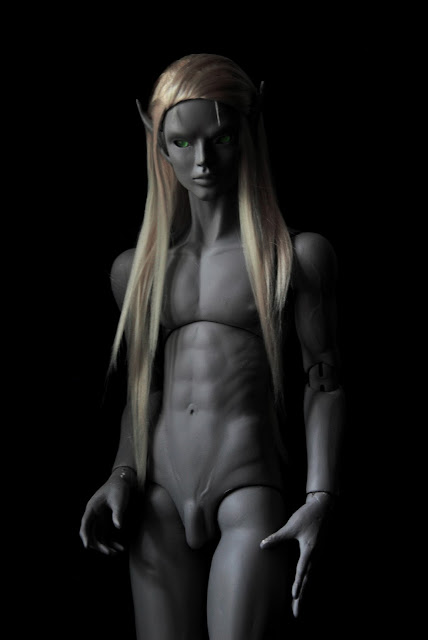 Kudos to someone who has been able to read this. I needed to vent out!
Publicado por Nanyalin en 5:07 pm 8 comments:

Yesterday I was discussing with a friend about BJD's archetypes, idealized beauty and the paradygma they represent.

I try not to define myself by any tag on a daily basis, but there are some open fires I highly identify with, so I am kinda safe saying ''I feel like this''. One is ''Feminist''. In his pure meaning of search for equality, respect and desire to free both men and from the formal tyranny we all suffer and has been standarised. As a feminist, I've felt, and often do feel, conflicted by the fact that I am creating dolls, which are objetuated women to the ultimate expression. Because, well, they are... objects. It is sometimes hard to cope with such a contradiction, and yet, after thought and reflection, I've reached some conclusions I would like to share with you.

The constant representation of the femenine body in art and literature has been, quite often, observed under the prism of a male perspective. Either out of objetuation, adoration or plain lust, male artists have been depicting female bodies dictating therefore the standards and canons of beauty according to their preferences. I would like to believe that there could be something intrinsecally feminist into representing the female body according to feminine ideals or preferences. Specially since quite often, they differ greatly from the male expectative of what a female body is, or should be. I know how often we, women, don't only try to reach formal perfection, but also imperfection or even exaggeration. The sculpture (doll in this case) then defines itself, and sets it's own standards. But I'm disgressing, and I would like to address exactly what has taken me to write this post.

I was once preparing my business cards. In one of them, I used a photo of Saoirse sitting backwards, showing her back and profile. I go ahead and printed several hundreds of them. Then, I went to proudly show the card to my family. They looked at it, giggled, and my mom frowned.

I looked around and my cousin then said bluntly ''It looks like a prostitute's call card''. And then everyone started to comment how inappropriated it was for a business card to display a bottom on it, etc etc. Feelings were hurt, I got angry with my family, and decided not to show them my stuff.ever.again. (I did, tho. Family can be ok sometimes :P)

After that day, I reflected long on my dolls and how do I depict and show them in my social media. They are, often, naked. Yet, I failed to see anything openly sexual or ''erotic'' on them. Perhaps because, as an art student that was constantly exposed to nudity during univeristy (We had to copy from natural like, 4 hours per day for 4 years, using live models that were terribly bored and often asleep), nudity never stroke me as something offensive or even sexual. To be honest, it was a time that the human models became just like the other composition subjects in class (the bunch of apples in a basket, the old chair) and all you cared for was how good your drawing was looking and if your teacher would like it enough to rise up your marks for that term.

So I realized I've applied that way of thinking into my dolls as well, and I happily photographed and showed them around naked without any further consideration. It was after those thoughts, when I realized that some people might think otherwise. And yet, I've decided to keep doing it as I did, rejecting those opinions. Let me explain you why:

To my, my fairies are just otherworldly beings, not subject to human laws of what is ''correct'' or ''modest''. I find something empowering and refreshing into depicting fantasy women displaying their beauty without social constraints of any kind. C'mon, they are fairies, inspired by pagan mythology and ancestral traditions. They do not know the difference between panties or a hat -for them both are just beautiful things you wear because they are pretty and you like them- So I decided that even if my dolls were unmistakeably sensual and beautiful, that didn't meant immediately sexual, or objetuated. Don't get me wrong, some of my pictures have an obvious sexy vibe, but yet again, I wanted it to look as a woman conscious of her own beauty and attraction, and unashamed of it.


Even if I can and I actually do enjoy the fragile, utilitary beauty that some creators display on their dolls, and extremely thin proportions or fashion-subdued approach to bjd making, I've decided that's not my path, which goes more towards different proportions -from the pinupesque, chubby bodies of my Glendalough, to the slender and modelesque Sidhes, and also flat chested Cluny, the all-round Roisin I'm currently working on, etc-. For me, beauty comes in all shapes, and I love making my dolls looking empowered and happy, healthy yet feminine. I would like to believe that the idea of refreshing nudity, freedom and conscience of the body as your own, as much as your privilege to show it without any social, religious or moral concerns of any sign is a display of female freedom, that conciliated me with the idea of my dolls as objects of trade. And even if sometimes I've toyed with the idea of creating with them images of sickness, sadness or restraint, something inside me makes me depict them doing silly nonsense surrounded by flowers and in a happy mood. Makes me happy, I guess ; )

The contradiction that lies within what is feminine -fragile but strong, flirtatious but elusive, motherly and maidenly- is something wonderful and allows so many ways of expression and interpretations as eyes are in the world. My compromise with feminism and the female causa is still on, and I really care of how can I affect or take part on it (even if my acts could be detrimental or contradictory towards it). As usual, I would love to hear and discuss your points of view about it. Thank you so much for hearing me ramble once more!